The Science of Gabions Towards Erosion Control

Soil erosion is a prevalent problem in both rural and urban areas. If left uncontrolled, it could lead to loss of topsoil, which is vital for planting and vegetation growth. One of the most effective ways of controlling soil erosion is using gabion walls. 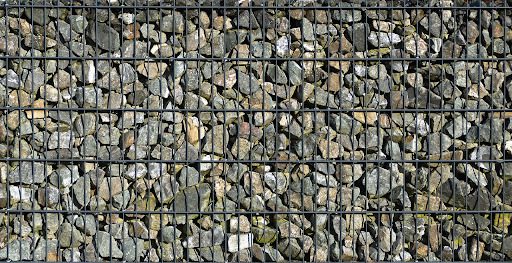 What are Gabion walls?

Gabion walls are box-shaped wire baskets made from a hexagonal mesh of galvanized steel wire. The “boxes” are filled with durable rock fragments and stacked on top of one another to form a gravity wall.

Gabion walls depend primarily on the rock fragments' compactness to maintain internal stability and their weight to resist hydraulic and earth forces.

What are they used for?

Gabion walls are mainly constructed to gently slow down the speed of run-off while sieving the soil it carries. They are also used to alleviate seepage problems on slopes. This mainly occurs on loose soils. They can also be used in areas with water-soil problems, where the land conditions, water velocity, water turbulence, and expected vegetative cover are set in a way that may erode the soil in the design flow conditions.

Gabion walls date back to 7000 years ago when the Egyptians used them to control flood waters from the river Nile. They wove gabion baskets using reeds, filled them up with small rocks, and arranged them along the Nile. The result was a significant decline in the river's erosion and the prevention of run-off flood water that destroyed their crops during the rainy season.

In medieval times, gabions were used as an inverted trench that protected soldiers from enemy fire. This method was also used during the American Civil War. These early gabion designs had open tops and bottoms. They were made from wickerwork and filled with earth to act as military fortifications.

These gabion walls were used to protect siege artillery gunners and scrappers. The wickerwork cylinders were relatively light and could be carried easily along the ammunition train. At the battlefield, they could be stood on end, stacked on end, and filled with earth to form an effective wall around the gun. They could also be used as a bulletproof parapet along with a sap.

When the Crimean War transpired, there was a scarcity of brushwood. This led soldiers to utilize scrap hoop-iron obtained from hay bales. This design inspired the creation of iron-filled gabion walls.

Today, the military uses gabion walls to safeguard their bases against fragmentary, explosive, mortar, or artillery fire. Examples of forwarding operating bases (FOBs) that use gabion walls are mess halls, sleeping quarters, and any other areas that house a large concentration of unprotected soldiers. 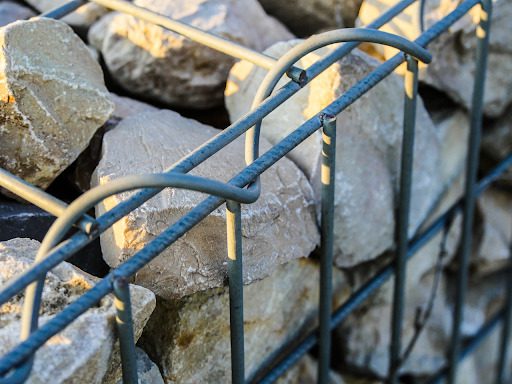 The most common use of gabion walls in civil engineering came about in the late 1800s in order to stabilize shorelines, slopes, and stream banks against soil erosion. Other applications in this realm include retaining walls, temporary floodwalls, noise barriers, silt filtration from run-off, river training, channel lining, and construction of temporary dams.

Over the years, the use of gabion walls has diversified as they are used in both military and civil engineering projects. Some architects have also incorporated gabion walls in their designs. Gabion walls accentuate the building's design and give it a sturdy feel, not to mention the added aesthetic appeal they provide.

The type of gabion used in any project depends on cost and function. That being said, there are four types of gabions. They include:

Gabion baskets are generally made of wire mesh and constructed in box shapes. They vary in size and are mainly used in highway and railway projects. Gabion baskets are an economical choice for any project, especially if the filler material is available on-site.

Also known as Reno mattresses, gabion mattresses have a lower height than other types. They are mostly used in channel lining to prevent erosion. They deal with wave and erosion-induced erosion by reducing water velocity.

This type of gabion is made from porous, flexible structures including cylindrical wire mesh constructions. They are mainly used in hydraulic works in emergencies since they can be built quickly.

This type of gabion design is used to protect railway and highway surfaces from rock and stone falls. They maintain the slope's stability adjacent to the railways and highways and are also used as anti-erosion agents by providing a reinforced cover over the loose material.

Gabion walls are often used as retaining structures such as revetment and tower walls, retaining walls, and embankments and cuttings. They can also be utilized as noise barriers, temporary floodwalls, or for aesthetic purposes including landscape elements and veneers. Riverbank defenses, sea walls, dams, canal banks, groins, and weirs are applications to prevent erosion and protect lakesides and reservoirs. Gabion walls can also be utilized to divert the force of floodwater around weak structures or in the construction of dams and foundations. Lastly, they can be used to enhance energy dissipation in channels, as is the case with stepped gabion structures.

Advantages of Gabions over other Erosion Control Methods

Gabions are the most durable of all forms of soil erosion control methods. They also have a high resistance to atmospheric corrosion, brought about by the bonded zinc coating on the wire mesh and optional PVC coating. Gabion walls can also support vegetative growth at the top, which acts as a shield against the elements and provides additional reinforcement by interlocking with the onsite soils.

Gabion walls provide easy and instantaneous drainage. This eliminates the need for drainage pipes in most applications.

Gabion walls can settle and deform without losing their efficiency. This makes them especially suitable when moving water and unstable ground are a concern.

Gabion walls are more economical in terms of both labor and material than other alternatives, especially when the filler material is available on-site.

Recycled materials can be used as a filler and placed in the gabion cage. The soil in the gaps between filling materials allows vegetation to grow over time. Also, the materials used in gabion construction are not affected by the elements and, therefore, do not affect the environment. 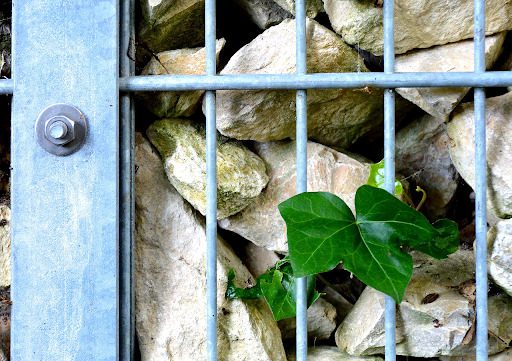 Gabion structures consist of steel wire mesh treated with an anti-corrosion agent, filled with a granular material to form a gravity structure. The weight of the structure enables it to resist the pressure exerted on it from behind. Although gabion walls are very durable, they are still susceptible to mechanical damage due to impact and deformation.

Gabion maintenance involves visual inspection, usually done annually. Any damage spotted during the inspection should be dealt with according to the purpose of the gabion. Gabion walls that serve essential purposes like damming should be repaired immediately to stop further damage and minimize the risk they pose in that damaged state.

Abnormalities spotted during the visual inspection of gabion walls may include: broken components, localized bulging of the face, vegetation at the face, damage by vandalism or impact, or excessive water through the face.

What should you look out for when inspecting a Gabion?

Individual broken, split or damaged cage components don't affect the gabion's structural integrity and can be repaired on the spot if need be. However, if several gabion components are broken in the same area, this may affect other areas' integrity on the gabion wall. Professionals should repair the damage.

This might pose a massive risk to the gabion wall's structural integrity and should, therefore, be repaired by professionals since they may require rebuilding with localized support for the landfill or water body behind the gabion wall.

Geotextiles are semipermeable textile materials used to improve soil characteristics. They can filter, separate, reinforce, protect, and drain when used together with the soil. Geotextiles are ideal for a wide variety of infrastructure works such as roads, landfills, harbors, and other civil engineering projects.

Geotextiles are made from polymers like polyester and propylene. They are classified into three categories based on how they are made. They include:

These are some of the most commonly used geotextiles. They are manufactured using the same techniques used to manufacture typical clothing textiles. The weaving process involves slit film yarns, multifilament or monofilament yarns being woven in the machine and cross machine direction. The thread running along the length is called the warp, and the one running perpendicular is called the weft. Woven fabrics can be constructed with polyester or polypropylene or a combination of the two.

Knitted geotextiles are made by interlocking a series of loops of yarn together. They are manufactured using the knitting technique in conjunction with other geosynthetic manufacturing methods, such as weaving and are generally made with polyester.

Non-woven geotextiles are constructed from a short staple fiber or a continuous filament polyester or polypropylene fiber. The fiber bonding is done through mechanical or chemical techniques or a combination of both including needle punch construction.

During the manufacture of roads, geotextiles are used to prevent the intermixing of two adjacent soils. A similar approach is used in gabion wall and other retaining wall applications by separating soil from the gabion fill or the drainage stone from the soil fill material. An excellent example of this application in roads is when there is subgrade soil bordering an aggregate coarse soil. In this case, a geotextile is used to preserve the aggregate soil's strength characteristics and drainage.

Geotextiles aid soil conservation by allowing water to drain freely through the soil with limited soil loss. The geotextile’s porosity and permeability aid this action.

The introduction of geotextiles in the soil enhances the soil's structural integrity, much like what steel does to concrete.

During road construction and repair, a layer of non-woven geotextile is placed between existing and new asphalt layers. It then absorbs the asphalt, thus acting as a waterproof membrane layer that minimizes the flow of water into the pavement.

Gabion walls have been in use for more than 7000 years now. Although they were initially used as a means of soil conservation, their applications have increased tremendously in military and civil engineering projects. Gabion walls are relatively simple structures, but it is essential to consult a civil engineer whenever you want to use them for large and sensitive projects. Doing so will ensure that the structure not only lasts longer but also provides the desired outcome.